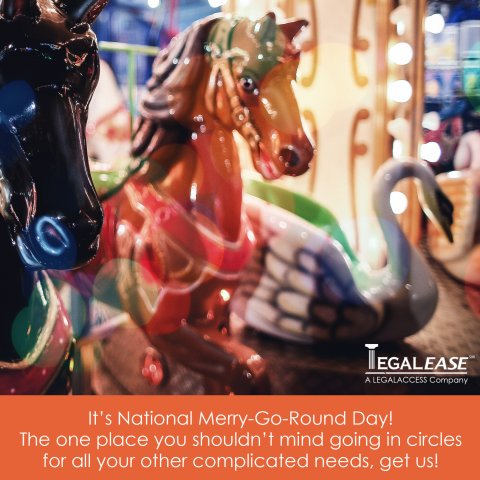 Today is the 4th Annual National-Merry-Go-Round Day. This day was founded in 2014 by Bette Largent, “President of the National Carousel Association, and carousel historian, to shine a spotlight on these beautiful, historical creations that still bring joy to people of all ages.  The date commemorates the first U.S. patent issued in 1871 to William Schneider of Davenport, Iowa for the modern carousel.” 1 Did you know that the earliest documented merry-go-round was during the Byzantine Empire, as early as 540 A.D., which depicted baskets, carrying riders, suspended from a central pole. 1 The Byzantine Empire was also known for the expanded development of the legal profession which became well-established, heavily regulated, and highly stratified.2

The exhilarating fun held from going around in a circle is only held by rides. When it comes to legal matters that come up the last thing you want to do is be looped around from attorney to attorney. However, LegalEASE is here to prevent that. Our concierge matching program will keep you from going in circles with multiple lawyers, so the only time you actually do go around in a loop is during a delightful ride, and not your life.